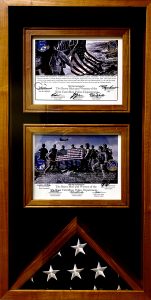 The framed gift, including an American flag and signed prints, was presented to, “The Brave Men and Women of the West Carrolton Police Department.”

The American flag was flown by members of the United States Army’s Bravo Company and the United States Air Force’s 83rd Expeditionary Rescue Squadron. It flew onboard a CH-47F Chinook helicopter during a joint combat mission with Army Aircrews and Air Force Pararescuemen near Bagram, Afghanistan on June 21, 2020.

As quoted by the United States Army and United States Airforce in the prints, “Let all who look upon this flag see it as a symbol of Freedom, Liberty, and Remembrance for those who have paid the Ultimate Sacrifice.”

“It is such a privilege to receive this flag and to think that these courageous men were honoring us as they were braving combat. We encourage everyone to reflect on the cost of our freedom and to pray for the safety of our men and women in the armed forces,” said Police Chief Doug Woodard.