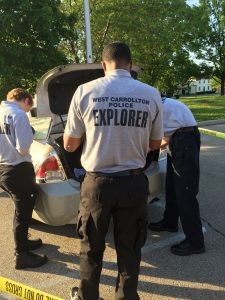 Three of the current 24-member West Carrollton Police Department got their start in law enforcement by joining the Explorer Post 433.

At least five other former Explorers are currently working for law enforcement in other Ohio communities or out of state, according to Police Chief Doug Woodard.

Officers Bobbie Selmon and Maureen Flaute are hoping to recruit approximately 20-25 people between the ages of 14-20 to join the current program.

“The Explorers meet once a month for two hours to discuss and train on new topics pertaining to skills that are needed for law enforcement,” according to Selmon.

Selmon said that explorers participate in crime scene and traffic crash investigation training, as well as practice interviewing techniques and testifying in court.

“Explorers also get the opportunity to participate in ride-a-longs with current officers which gives them a first-hand experience about what it is like to be a police officer,” she said.

Any interested participants, including those who are in the process of obtaining their Ohio Peace Officer’s certifications, are encouraged to join.

Selmon said that in addition to helping to develop a police department workforce that is “prepared to hit the ground running,” the program also simply encourages more community involvement. The Explorers often serve as volunteers at special events by directing traffic control or parking.

For more information, call Bobbie Selmon at (937) 859-3688 or email bselmon@westcarrollton.org.