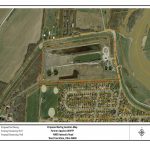 Starting on Jan. 7, four MAKSolve analysts will drill 50 soil borings, 3 feet in depth, spaced at 40-foot intervals around the perimeter (outside of the fence line) of the site at 4000 Hydraulic Road, on property that is maintained by the city, the Miami Conservancy District, and privately owned. They will also conduct sediment sampling along the river, and install three additional monitoring wells for ground water sampling.

The goal is to confirm that no offsite migration has occurred of polychlorinated biphenyls (PCB) compounds that were left behind when the property was used as the treatment facility for sludge developed during the early carbonless paper production process.

Soil sample tests done in 2001 confirmed that PCBs were located underground at the site. The long-term redevelopment plans call for a recreation field at the site.

The PCBs are not water soluble nor likely to migrate via groundwater transport, according to the MAKSolve analysts. Groundwater samples taken in early 2018 showed no evidence of migration, said John Bowen, MAKSolve senior project manager.

“The potential exposure is pretty low, but we need to know in order to move forward,” Bowen said.

When the city acquired the site in 2015, the understanding was that these compounds were not migrating off site, according to Brad Townsend, West Carrollton city manager. The EPA has simply asked for additional testing to verify this understanding, before approving the site for possible grant funding.

The cost is $28,000 for the MAKSolve analysis. The testing schedule is weather dependent and results will be made available once complete.

Townsend said he wants to reassure residents there is no impact on the city’s water supply. “We are simply performing our due diligence to assure that the future green space land is cleaned up properly.”