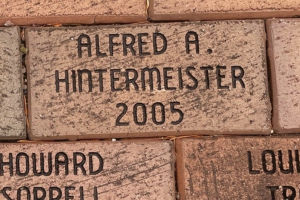 Through the ‘Plaza of Fame’ award, the West Carrollton City Council recognizes current or former citizens who have made a unique or noteworthy contribution in making the city a better place to live. Since 2003, forty-one people have been recognized with the award. All honorees have their names engraved on bricks placed at the Civic Center.

A three-member city council subcommittee will choose the Plaza of Fame recipient(s) based on nominations from citizens, and in the fall, a ceremony will be held to recognize the individual. One person (or two if nominated as a couple) will receive the award each year.

“We are very pleased to bring back the ‘Plaza of Fame’ award. It’s been a few years since we’ve honored someone with this distinction. We know there are so many in our community who give and contribute every day and are looking forward to seeing citizens recognizing citizens through the nomination process,” said Mayor Jeff Sanner.

To nominate an individual deserving of this honor, complete a nomination form and submit it to the city for consideration.

The form can be downloaded here, or be picked up at the Civic Center, 300 E. Central Ave., from 8 a.m. to 4:30 p.m. weekdays. Completed forms can be emailed to hvanantwerp@westcarrollton.org or returned to the Civic Center.

The deadline for nominations is Tuesday, August 31, 2021.