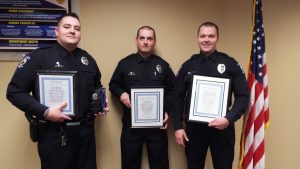 Officer John Perry received the department’s 2018 Employee of the Year Award, after being nominated separately by three of his fellow officers. He also receive the perfect attendance award, along with Officers Jared Moore and Matthew Harper.

Police Chief Doug Woodard said that Perry, who began with the department in April 2014, consistently distinguishes himself by completing his duties “in an unassuming manor, never attempting to draw attention to himself or his accomplishments.”

Woodard cited four different suspicious vehicle stops that occurred in 2018 and resulted in multiple arrests for active warrants, as well as the recovery of drugs such as heroin, LSD and methamphetamine, stolen guns, other weapons, and more than $5,000.

Woodard said fellow officers recognized Perry for his positive attitude, leading by example, and completing 460 hours of overtime during the year.

Several other officers also received commendations during the award ceremony. They included:

Perry & Harper, who were recognized for successfully taking a subject into custody without harm, who was attempting to force officers to shoot him on a roof;

Officer Bobbie Selmon, who received recognition from the 100 Club of Dayton for her work with adolescent youth;

Officers Selmon and Maureen Flaute, for transforming the department’s Explorer Program into one of the most-attended programs in the area;

Officer Becca Black, who responded to a bicycle theft report by a 12-year old resident, and replaced the bicycle with her own money.