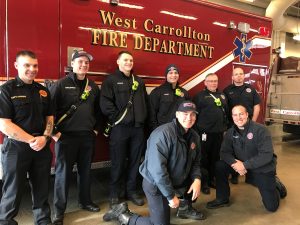 West Carrollton city council unanimously approved legislation to place a 3.9 mill Fire and Emergency Medical Services levy before residents on the March 17, 2020 ballot. The proposed Fire/EMS levy would be a five-year levy that can be renewed after that time. The funds generated will be used exclusively to support the Fire Department.

The city’s Fire/EMS Department has relied on part-time employees to fully staff both Fire Stations 56 and 57 for years. Hiring and retaining both full and part-time staff has become increasingly more difficult in the last several years.

While we endeavor to fully operate the stations and apparatus using the current staffing, including the use of overtime, daily emergency response levels can vary. Browning out apparatus or temporarily closing a fire station results in a reduction in our daily firefighting and emergency response force.

The levy will allow the city to stabilize its emergency response times by to hiring four additional full-time firefighter/paramedics as well as increasing part-time salaries by 10 per cent to stay competitive with surrounding municipalities. Another way to attract part-time EMTs is by offering assistance in supplementing the cost of attending paramedic school to further their education. The levy will allow for the city to provide some assistance, if needed.

“By having the ability to recruit and retain both full-time and part-time personnel we will be able to fully staff both stations 24/7/365, which is what we strive for every day,” states Fire Chief, Chris Barnett.