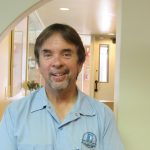 The West Carrollton city staff is mourning the loss of a colleague. Dewayne Jarvis, water & sewer supervisor, died yesterday after battling cancer. He was an employee of the city since Aug. 4, 1997, when he joined the city as a laborer in the refuse division. In 2001, he transferred to the water and sewer division, and was promoted to supervisor in August 2014. His family will receive friends on Tuesday, Jan. 29, from 4-6 p.m. at Newcomer South Dayton Chapel, 3940 Kettering Blvd.